Our plan was to leave the B&B at 7:00.  We had a metric century uphill to Carson Pass, a 35 mile downhill to Genoa,  and a long flat run into Carson City.  Ralph and I had some concern about the 10,000’ of climbing...  Ralph can downhill like a fiend and we didn’t figure that would give us much trouble.   The typical  scrumptious breakfast was planned for 8:00 so we told the guys to sleep in until 8, eat the obligatory good breakfast, and then come find us on Omo Ranch Road. We would leave early. We overslept and got a late start but the morning ride to Fair Play, Hams Station, and Cooks Station was cool with minimal traffic.  Our last night’s waitress Molly, encouraged us to visit her cyclist dad who was a principal at an elementary school on the route.  We found the school but it was summertime and had the empty abandoned look consistent with no students. She thought he would like to know about our glorious adventure but the day was  perfect, he wasn’t there, and we figured he had to be out on his bike.  We did not make good time uphill.  Too much scenery to keep admiring and we seemed to stay at 7 mph rather than 9mph.   The Garmin 705’s are a lot of fun to compare  data displays, elevation, HR, cadence, grade, and nearest whatever to keep your mind off the climb.  After the cramp yesterday I was wary of the heat and wanted to keep moving on up to minimize the climbing temperatures.  Higher equated to cooler and therefore easier.  The more miles at cooler temps the better in my mind. 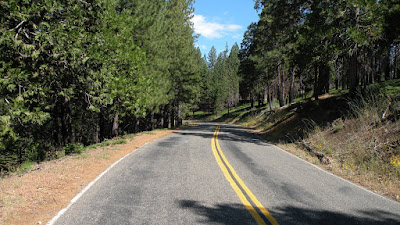 I was very impressed with the Adventure Cycling route. Narrow roads, no shoulder but it was not busy at all.  The views are not as good we were told as on the Mormon Emigrant Trail but the lack of traffic more than made up for lots of glorious vistas.  Hardy and Daniel  joined us at Hams Station and we unloaded the Gitane for Hardy to ride.  With the 42-24 gearing, he could go much faster than Ralph or I, but it must have exhausted his reserves. He gave out in Kirkwood.  We badgered him to make the last 5 miles to the pass but he was toast.  When we caught up to Daniel chilling on a rock with a 270 degree view we sent him for sandwiches and he did a masterful job of getting bagged lunches we shared overlooking some really fine scenery.  Riding uphill all day is a pain but it’s so pretty I wish it could have gone on and on.  I was already thinking of the loneliest road in America across Nevada.  I wasn’t expecting much but heat, mirages, and Mormon crickets..

I mention the Mormon crickets because I had the misfortune to read the Wall St Journal one random day while waiting for a breakfast meeting to start at Panera Bread and there on the front page was this huge ugly locust thing with the headline exclaiming that this year was the 17-year (or whatever) cycle for the re-appearance of these nasty crickets that plague little towns in Nevada.  It went on to describe clouds of these insects descending onto roadways made slippery with their guts crushed by passing cars.  I was trying to visualize being 40 miles from some nowhere town with nary a car in sight when a 10 square mile cloud of locusts lands on me.  I had heard of snakes sunning themselves on the road and the curious case of a speeding cyclist who ran over a sidewinder crossing the road, throwing it up on his body where the frightened snake bit him multiple times while he was locking up the brakes.  That had worried me but riding for miles through locusts seemed worse.  And tomorrow was the day!

When we left Kirkwood we told the guys to meet us at the summit.  When we arrived they were nowhere to be seen and we did not have cell coverage.  Ralph and I waited around for 30 minutes in the parking lot at the summit but finally it was getting so late we just had to head down.  I was steamed at my son because the glorious descent would be marred with worrying about where he was.  If he had driven off a cliff I should be doing something besides biking to Carson City and if we missed him we were about to really pick up the speed and would be hard to find.  Perhaps the car had problems.  My son is almost as bad a mechanic as I am and his buddy Daniel of the clueless clip-in is an English major and could deconstruct Joyce but I wasn’t sure he could jump off a battery..... We found the renegades 300 yards down the hill at an overlook.  They figured we would see them as we came down, which was true. They were rock climbing.  It came to me that if they fell off a rock while  we were descending 50 miles to Carson City, things could get interesting.  Suddenly having a sag seemed a liability!  One more thing to worry about.  I had to stop this planning for every eventuality mind set.  I think I was trying to ride as if we did NOT have the Sag backup to get a psychological feel for how to do the trip without it.  So I was trying to pretend we didn’t have one and be completely independent of it and then on the other hand figure out how to use it effectively to see all and do all we could.  Like trying to live two lives at the same time under different assumptions and belief systems.  Tiring.  Have you ever played a round of golf with two different balls and kept the score accurately?  I have started a game like that but I can’t recall that I’ve ever finished a round like that. Need to “Quit worrying”.  We are not going to die in Nevada on a US highway unless we get hit.  Lack of planning may leave us thirsty but not skeletons. Well, the downhill was about all I had dreamed of.  Five miles in the big chain ring off the summit and then a slight downhill across an alpine meadow where hundreds of fisherman were casting flys in the glacier runoff.  Every turn was more cliffs and my neck got tired of craning to take it all in.  We T’d into the foothills road to Genoa and suddenly we were in a much drier clime.  We passed the Nevada line--one state trans-navigated and three to go.  Genoa was an historical little town we would have liked to stop in but it was getting late.  I had planned to camp at Lake Tahoe after dropping Ralph at an hotel but I was hungry so we all just de-camped to the Hampton Inn and punted the camping thing.  There was just enough Time to get  dinner at a steakhouse after showers.  Beer is an incredible soporific after 119 miles on the bike.  It was close to 11:00 when we left the restaurant and we missed the hanging out by the pool because I was too whipped to get in the sauna.  I would never have gotten to the room if I had set foot in the hot tub.
Carson City is not that ugly.  Certainly no worse than my own hometown, H--------.  I have gotten very critical of the physical appearance of suburban America.  It’s hideous.  You know the problem;  strip malls, signs, Walmart, roads everywhere. It’s made for the cars not the people.  It may prove to be the optimal utilization of society’s scarce resources  because it can change but it is not as pretty as Nature.  Nature can be remote, dangerous, and  brutally indifferent to human comfort and a fast food restaurant is hospitable with its food and A/C but most towns’ physical appearance makes me sad about our lost opportunity to have already created a human space that’s comfortable and chic.  Can’t we have esthetic urbanscapes?  I think as a society we could do much better, though I’m no architect or urban planner.  Our cities “look” is determined by the income production of its individual parts.  We are a free country and individually we decide to build something that can be paid for in a reasonable amount of time.  What could we do differently?  Europe is older and prettier but has a lot of laws, high prices, and shortages.  The CAR creates the “look” of America.  Bikes can operate in this world but seem forlorn.  What would a mass transit and bikes system look like? At minimum, Higher density for accessibility.  I do not mean to tear down the junky buildings we’ve got and construct some Versailles but it would be useful to put in place incentives that would make building more environmentally conscious and ecologically sustainable.  Cheap gas has distorted a social order that would be prettier if not so dependent upon the hidden subsidy of cheap energy. I think it’s cheap because the market prices it short term, the people who might use it in 100 years don’t get an economic vote.   Some would say the ‘real’ price is determined by the market but I think that is a short term price, the long term price is simply not calculable....(or actionable).  I think we have a lot of physical CAPITAL stock that is really valueless and not suited for sustaining us in the future.  Bad mortgages have us ‘underwater’, but thoughtless planning has drowned us in decaying infrastructure.  And then I see pictures of Haiti or Somalia or a favela in Rio or slum in Bangalore and I say, you know it could be a lot worse..
What do contrarians believe in?  I tend to pull against the common wisdom.  I tend to be the devils’ advocate.  Where did I get that psychological predisposition? My mother. I like people, I’m incredibly sociable and forgiving.  I don’t hold grudges-or at least I’m 57 and don’t have any so it’s likely I don’t collect them easily.  It’s arguable that contrarians don’t believe in anything.  They believe the opposite of what you think.  Contrarianism is however a sharpening foil.  It is designed to elicit what you “really” believe.  Contrarians don’t buy lip service, we’re looking for the real deal.
Posted by AlaBikeDr at 8:42 AM