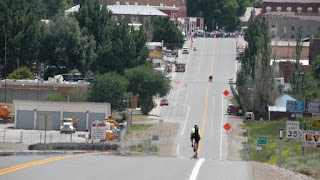 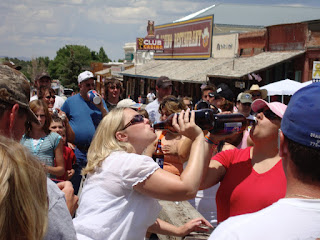 You can see the 4th of July crowds in the street welcoming us to Eureka!  The women above show what they were doing when we got there.  This is the 32 oz. beer drinking contest, won in 18 seconds.  We also “caught” the spouse egg throwing event.  Several spouses were too drunk to catch a balloon, much less a raw egg...  But I’m getting ahead of my story. 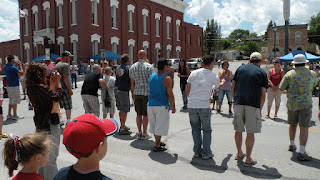 Dawn in Austin was crisp.  I got up early to check out the town, all towns even ghost towns, look better at dawn.   I wondered if all the  empty houses were $1 like Detroit.  I didn’t find a newspaper or anything open so returned to the hotel and fired up the camp stove to boil water for the coffee press.  I think I like the percolator better even though it obliterates a lot of the taste.  It ADDS smell and helps wake the sleepy heads.  Ralph and teenagers are slow starters.  I preferred riding from 8-10a when it was cooler than at 2-4p when it was "warmer". Starting the ride at 6800’ in the cool of the day does not prepare you for the valley floor at 4500’ in the late morning.  I believe today we had the highest daily water consumption on the trip, 2-100 oz Camelbacks and a plethora of gatorades and waters passed out from the car.  Maybe 300 fluid ounces?  Is that possible?  20 lbs of water?  Ralph brought his scale.  He said it was useful to check for dehydration.  We sometimes were down 8 pounds at the end of the day.  Does that mean we evaporated 30 lbs of water?  Consider that when trying to carry water for camping in the west, if you are not planning to stop at populated waystations or campgrounds. 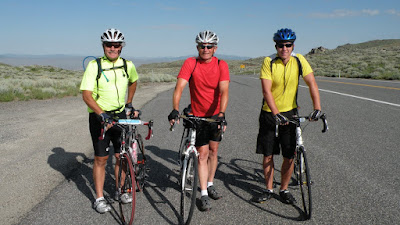 There’s a beautiful rhythm to riding in Nevada, not disturbed by traffic.  The dusty valleys have straight interminable roads where you can see 15-20 miles and then another ridge where you climb 1000-2000 feet, pick up some scruffy looking bushes that are at least green, some great vistas, terrific downhills, and then another slog across the valley floor.  There are probably 12-15 ridges to traverse.  The first this morning is Austin Summit.  While we were posing at the top of the climb, an antique car roadshow passed from the opposite direction celebrating the 4th, blowing those funny sounding Model T horns.  I think it likely that roads will be America’s distinguishing feature, our claim to fame. Cathedrals in Europe that are not fully attended by worshippers only visited by tourists could be their ‘excellence”.  America is truly about the car... What happens when gas is the equivalent of $10/gallon?  Will economic activity slow so much that peak oil is pushed out another decade before population and economic growth in China and India start claiming a majority of world production?  Will roads be like Costa Rica--so full of potholes that it is quicker to ride a bicycle 80 miles than to take a taxi?  The bike is perfect transportation.  Better than a horse that needs attention and makes a mess in a city and better than the car because it keeps the human scale.  The bicycle missed its calling because it was invented at about the same time as the automobile and plane and they were sexier.  We’ve seen the evolutionary impact of these transportation modalities--this century the bike will find its place.  OK.  Maybe a motorbike for all you lazy people....

Hardy says the saddle on the Gitane is painful.  The beautiful (Greg Le Mond System-U)Gitane, restored and re-painted is relegated to a back up role.  Both Daniel and Hardy take turns riding the Cannondale 6-13.  I thought they would prefer riding in their tennis shoes with toe clips so they could walk around but the three of us all have size 10 feet and can wear the same shoes so we just pass the cycling shoes around.

Scott Summit is a few miles after Austin summit, a little lower, but the picture looking down the road shows how pretty Nevada can be especially in the early morning. Eureka is in party mode when we arrive.  We rolled in on US-50 and there is so little traffic they had set up tables on the road for prizes and local community announcements.  All the activities in downtown Eureka were actually in the middle of a US highway!  Approx 60 couples participated in the egg throwing contest.  Lined up on the centerline of the highway, spouses take turns throwing an egg back and forth while taking a step back each time.  It did not take long to eliminate most of the town.  Under alcohol impairment, ten yards is a pretty satisfactory throw.  The burgers smelled good but we unaccountably decided to go inside (A/C perhaps?) and have Chinese food.  Maybe it was the Grand Opening sign.....  There was a large Mexican family with a crying baby and that wasn’t the worst part of the experience.  Slow service and really bad food.  I did not realize Chinese food could be that bad.  Perhaps the oil was used for something else....It will not survive long even in a miniscule town with limited culinary opportunities.  Upon emerging into the afternoon heat we decided to give our bellies a rest and take the auto transporter to the top of Antelope Summit, some 25 miles away.  We figured that would make the 68 mile ride to Ely a bit easier.  It did. Starting at the top of a climb does wonders for your psychology, no matter how bad lunch was.  The downhill run into Ely ( the largest population center since Carson City) was evocative of many Western films buried in my subconscious.  Strangers from the desert come sweeping into town, sizing it up, checking out the saloon.  We found our Inn on the far side of town just in time to beat the thunderstorm.  It didn’t look like it EVER rained in this area but suddenly there it was gulleywashing.  In 20 minutes the sun was back and in an hour it looked like it had never rained..

Dinner was at the Nevada Hotel and Casino.  I’m not much of a gambler.  All the mechanical bells and whistles seem like forced fun.  The illusion of future riches can be cultivated by many pretenses.  Why not pretend God intends manna from heaven?  A stranger struck by my earnest, social do gooder conscience, just offers an award?  There is no outwitting mathematics....Gambling, the feeling of being lucky-omnipresent at best, transient at worst has no command on reality.  Hope is not a strategy despite its pedigree as a fall back position.  I liked the rattlesnake skin and branding iron decor on the cafe wall.  It seemed pleasantly dated.  Rooms are only $45, substantially less than modernity at the Motel 6.  I detected no obvious brothels, this being Nevada and all, and I hated to ask any questions to inform my ignorance.  Sometimes what things look like is the only truth that will ever stick.

Gambling is big business.  My personal interest in this extends only as far as my daughters interest in going to Georgia Tech, a state school paid for by gambling money for qualified GEORGIA residents.  All others, $40,000 please.  Since any B student in Georgia can go to college for free it is obvious that people in Georgia  throw away an incredible sum of money.  I’m actually  proud of backward Alabama on this issue.  We may be one of a small minority of states that don’t have a lottery, because most of the voters think gambling is wrong.  Imagine that, principled opposition!  The cynics may claim the church, Creek Indians and charity bingo halls want the action to themselves....

Here's a thought.  One ant is an harbinger, but not a problem.  What one ant “thinks” is inconsequential.  How different are we?  What is important is the cumulative effects of numerous thoughts. Daniel Dennett and the meme.   When one ant finds something—it is not long before they all are all over it.  My thoughts are the thoughts of a single ant.  Like a scout in search of food, I am wandering around keeping my heart open, looking for meaning.  Civilization is the big stage.  The sum of social organization can be grand, grander, or dysfunctional.   I would like to participate in a grand civilization.  Perhaps we already have….this is as good as it gets.   It is natural to want to do better and our civilization is feeling a little threadbare these days.  Perhaps it is the comparison with the possible that makes the Real seem so tacky.  What could we do had we but world enough and time?  But we are saddled with the detritus of a cheap, trivial, frivolous culture,  Our culture lacks nobility.  And it lacks it because freedom in the Now is more important to us than the sacrifices for the future.  We want it Now and we have got liberty now but using liberty for trivial ends dissipates it and we are now busy pissing our heritage away.  What of excellence?  What of nobility?  No ends are worth the cost—party on.

Is a Grand Civilization or a return to the Garden of Eden a better human goal?  Perhaps maximizing individual human freedom would be better.  What is each individual capable of  OR with sacrifice, what can all people do together?  Do we have a clear enough idea of what mankind is capable of or do we need more time? Is our modern interest in dinosaurs a morbid fascination with  a 150 million year failed experiment?  Is it our time for the Second Coming?  Perhaps with the invention of nuclear weapons and the inability to get along we are headed to the evolutionary graveyard as well.

I imagine God as fractured into his creation.  He cannot escape it or transcend it.  He has the Sisyphean task of re-becoming using the Reality he has become.  Like uranium, capable of critical mass when re-assembled.  Or like a strong spiritual magnet, attracting to himself,  all spirit “matter” until he is re-constituted.  Or like a black hole that consumes the universe, turning  all that is, “inside out”, thereby re-rolling the dice of the Laws of Nature to discover again what is possible.  Does love disappear without people?  Does virtue have a home planet?  How small can excellence be? How large is perfection?  If my heart yearns—I cannot help but commune with God…..

I had meant to blast God but surely he is blameless.  It is our fault—on that the religious and the secular can agree.  Religion distracts us from many sorts of truth and then paradoxically points us toward other truths.  We build a dream castle of Heaven so we can be nice to our fellow men.  We imagine where we want to live and make the surety of Death the portal to get there.  Why be altruistic?  How often?  Should we ever be cruel? No? Even if an illusion demands it?  It’s not that God doesn’t care—he’s beyond caring.  The point is—what’s possible?  Reality is a judgment on the Possible.

Posted by AlaBikeDr at 8:24 PM