We are all a heartbeat away from being like John Belushi and yelling. “Roadtrip”! 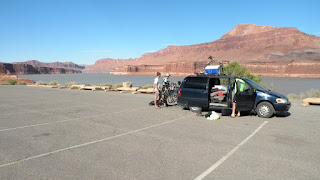 The Colorado River Crossing at Hite is a “camping area” that looks suspiciously like a boat ramp.  It is 50+miles from Hanksville and another 75+miles to Blanding.  There is a small store open from 8-5 at the boat launch area but it is a looooong way to a real grocery store and we saw only the one ranger lady tending the store. We had some supplies and bought only ice the next morning. A few trailers  suggest a “community” but there is not a lot of activity.   Shortly after we arrived we were joined by two guys from the Rhode Island School of Design on fully loaded bicycles slogging along for a cross country tour.  Our first cyclists of the trip!  Brothers in adventure!  They pitched their tent in the dust with us and we were glad to finally meet up with someone doing a cross country tour. These fellow cyclists were “going our way” and we enjoyed re-living the highs and lows of the route.  They had left San Fran on June 16th while we had left June 30th.  They were trying to finish the transcontinental ride by September 1.  It had been a hot, hot and long day and they had only their little canteens with a filter pump.  We were scarfing junk food and cold Gatorade while they prepared their whole wheat pasta on backpacking stoves.  Self supported on this route would be spartan.  We had coolers of cold drinks, flip flops to walk on the rocks down to the River for a swim and as I said earlier, we brought too much stuff  BUT having a fully stocked sag wagon is certainly a delight. 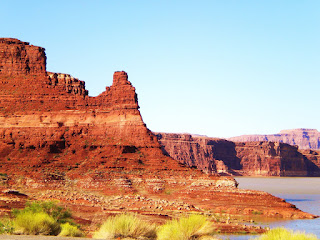 I slept completely comfortably all night on the ground without an air mattress. This might be a comment on the previous days effort and surely it was the dehydration that kept me from having to piss at 3AM, which was an unexpected pleasure.  The morning was pristine.  No activity anywhere.  I would have expected a number of early morning fisherman, boaters getting started for a day on the river, etc. but it was silent, the rocks like sentinels, waiting for the sun.  The tent zipper was loud as I crawled out.  Despite an urgency sending me to the enviro-porta potty some 1/4 mile away, I broke out the backbacker stove, screwed on the butane tank, and lit a fire under more than a quart of water, enough for  a LOT of coffee.  Then I ambled off for morning duty.  Returning, it was time to employ the coffee press.  The boys, like frogs in hot water, would not stir until the sun got up enough to heat the tent to unpleasantness.  I wasn’t sure about Ralph.  Drinking coffee and watching the sunrise on the Colorado as the grey cliffs turn fiery was at least as restful as sleeping.  Many mornings we were in some haste to pack up and move on but today we were headed to Natural Bridges for lunch and as far to Moab as we could get.  We did not have a schedule.  I ate my cereal and bananas and considered whether it was possible to have come this far without crash or flat.   I was grateful for our great good fortune.  I have been on club rides of 40 miles with six people and had 2 flats and needed to call my wife to rescue me, so we had been lucky.
We packed quickly and were ready to go by 8.  No sign of the Rhode Island School of Design boys, still asleep. Today's ride would be uphill to Natural Bridges Nat’l Monument.  It was a beautiful morning and the grade was not bad at all.  The boys decided to do some canyon exploring so it was just Ralph and me on the bikes.  The scenery is pretty but not as dramatic as yesterday, gradually the vistas open up and we spot the only scenic reference point before lunch, Jacob’s chair.  There’s not a lot to say about Jacob’s chair.  It does look like an Egyptian throne but I find the slot canyons the most interesting.  All of the water is heading to the Colorado so as we gain altitude, the canyons get deeper.  This area of the country could use a few trees.  No shade on this route.  We met the boys at the entrance to Natural Bridges.  It’s about 2-3 miles into the Park so we loaded the bikes and portaged in to do the loop.  They had a nice picnic table on  the North side of the air conditioned gift shop so we ate peanut butter/jelly  sandwiches and a  bag of Doritos.  I wonder what that red stuff is on these chips?  You can’t get it off your hands without a scrub brush.  This was the least interesting National Park in my opinion.  The previous sights overwhelm the vistas from the road.  If we had hiked it probably would have been different. 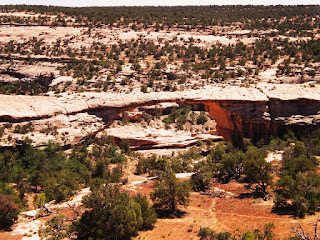 On to Moab!  It now was pretty hot so we had the car take us to the entrance.  Half way to Blanding the descent to the Chisolm Wash is fantastic but the whole way down you can see the semi-trailers and RV’s climbing the cliff on the opposite side and it takes away from the joy of the descent knowing you have to go right back up.  The interesting rock formations start to disappear and finally going into Blanding there is just one left, a solitary hoodoo and goodbye to all that.  We join the main road to Moab and feel like we have returned to civilization.  There are actually stores on the road and traffic.  We were more used to occasional a/c ensconced travelers that blew by like dirt dervishes.   This route to Monticello is not fun.  We’re tired.   It’s a four lane highway.  We pack it up in Monticello.  Time for the auto-transporter.  We’ve done 90+ miles.  We  have not  reserved a room in Moab so we want to go ahead and get there to find something.  I slept on the ground the last two nights.  I’m thinking of something with a bed and maybe a jacuzzi and bar..... Comfort Inn has a suggestive name and I’m driving, so I stop. Home for 2 nights.   (It does not take us long to find the pool). 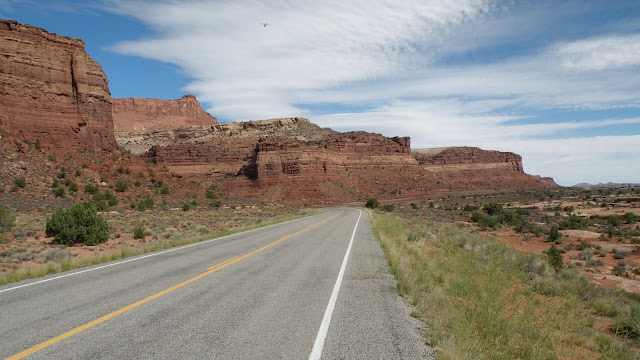