Yesterday our big issue was the SAG.  The car seemed to be running a little hot.  We checked it and the oil and antifreeze were fine - however- when we allowed the hood to slam shut, the hood prop became entangled in the locking mechanism and we could not re-open the hood.  It was the 4th and a weekend-no garages were open-so we just drove the car.  At some point though we would have to have access to the engine.  Sunday morning did not seem a promising morning to get it repaired but we had a long ride today.  We asked the motel clerk who said the maintenance man at the hotel could probably fix it for a few bucks.  He did in 20 minutes (we had individually struggled for 45) and though I pressed $50 on him, he ended up only taking $20.  Goodness and expertise abound. NOT.  But in my world they are present perhaps more than I deserve.

Today was a decision day.  We wanted to have an extra day in Moab, UT to explore Arches, Canyonlands and Dead Horse Point but the best way to pick up that extra day was to go 200 miles today to Cedar City UT instead of stopping in Milford overnight.  That would require two days to Cedar City and we were aiming for next Saturday in Telluride.  The trip has turned out a bit different than I thought, we are just riding as much as we feel like and having fun exploring.  We are not subduing the desert heart of the American West on our bikes.

Ready to go at 8:30.  Neither of the boys wants to ride. Premonition? After we get the car fixed, we pack up for a long ride, destination Baker for lunch approx 64 miles away.  Great Basin National Park is close by and we can decide at lunch how much of it we want to see... The Motel 6 parking lot is surprisingly busy on Sunday morning as we head out. We turn left out of the lot to the Southeast. Headwind!  What a bummer.  The wind is strong and steady and despite a relatively flat ride, pacelining we can only manage 11-12 mph.  Pain and agony to think about going 150miles like this.  Ralph is upbeat.  He has checked the weather and it shows the wind shifting to the southwest and after 15-20 miles the road turns more east than south and we should be alright. 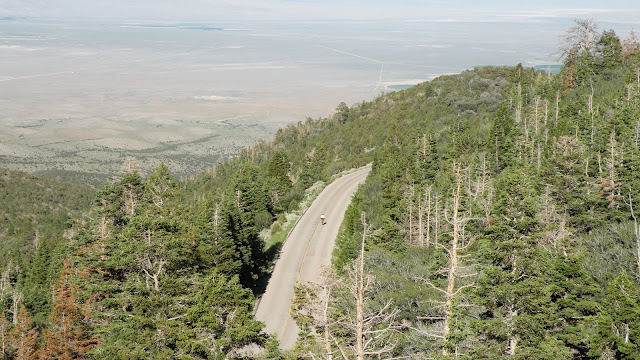 What is, is incredible.  Of all things possible, it is.  Of course in the infinity of time this may have occurred before—in exactly the same way( the eternal recurrence) but I doubt it because there are too many possibilities in every instant.  So what then is paramount?  Appreciate  the reality of now. Have some gratitude for the circumstances that have bloomed us.   Be ready to do the most needful thing.  Have courage for the moment. I imagine these words but wonder what they  mean—practically.
A niggling concern. Is  God a necessary idea anymore?.  After all we have been modern a long time.  Apparently, 82% of Americans believe in God,  and 9% more in a Universal Spririt.  The gist of the difference is that God is active or participatory and a universal spirit would be more remote, perhaps present in the nature of things but not really an entity.   55% of Americans believe that the Bible is true, 29% believe that  every word of the bible is literally accurate—that the events it describes actually happened:  Garden of Eden, Noah, Jonah, Virgin Birth.  The people who believe these crazy things do more good work than those who don’t.  Religious people  seem to spend time worshipping  but still have more time for charity than the rest of us.  Faith may relax people into simple actions.  Your brothers’ keeper?  Just do it! The thoughtful and skeptical are often at cross purposes: on the one hand ready to act, on the other realizing the difficulties.  Stymied in their search for the Good by the probability of the Better and the illusion of the Perfect.

Sam Harris’ pugnacious little book suggests that we abandon our faith in religion because it has become dangerous to believe in a world after death that requires we act in certain ways to propitiate God and find the good.  I feel that all these „modern“ questions that have arisen since Darwin,  were contemplated by Nietzche and then exploded at the turn of the century into a multiplicity of „isms“ that have all been found greatly lacking as guides and direction for human endeavor.  We have lost God but not yet found a new direction.  People are afraid to give up their God and lose their place in the universe.  Many seem to have gone back to an old time religion.  But what new destiny could we substitute?
Wallace Stevens made some notes toward a supreme fiction:  it must be abstract, it must give pleasure, it must change. The more people there are the less valuable each individual. The planet is a zero-sum biosphere.  More people fewer elephants, and tigers and bears. Are we like ants in a colony, hard-working and expendable?  I’m actually OK with that...... 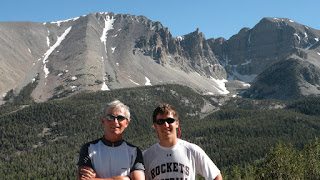 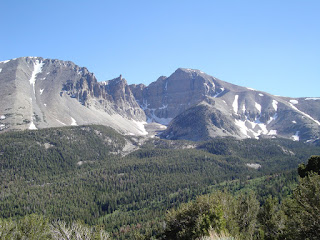 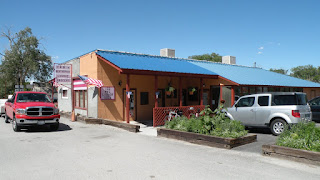 Baker is one small, flat, hot locale.  There is always somebody else around when we stop but there are not many folks in this corner of the universe.  Mexican food. Great lemonade.  A/C is divine.  As a southerner, I’m wondering if it is the single greatest invention.....  The single greatest idea is Richard Dawkins' “the meme”.  An infective unit of cultural expression.  We are infected by good ideas (and bad ideas) and they replicate like viruses.  Everybody retains what they find compelling and a constant winnowing produces “Culture”. We are replicating organisms, our ideas are replicating memes.  God is trying for something really special....
Posted by AlaBikeDr at 10:51 AM