Today was the greatest day of bicycling in my life.  The most challenging, the most variegated, and the most stunning miles ever.  The easiest way to describe this ride is to say that it is like riding on different planets.  The scenery changes so remarkably that it is one breathtaking experience after another.  I suppose driving it would be pretty too but the immersion in the challenge of “getting to the Colorado R” and what you have to go through to get there, was worth all the cold mornings getting ready.  This is a must ride.  There are beautiful rides through Oregon and coastal Calif.  The going to the sun highway in Glacier is breathtaking, Vermont is so warm and inviting with its little vistas and charming towns, and France is lovely too through Burgundy.  This route though is a testimony to the greatness of the bike as transportation (able to leap tall buildings with a single bound), and the natural wonders of the American West.

I wish I could have ridden the entire 163 miles but I did not train enough to try it.    We decided that we would auto transport the 27 miles from Escalante to Boulder, thereby skipping the dreaded “hogsback climb” up to Boulder.  The description was terrifying-8 miles uphill with 15‘ from cliff to cliff -2 lanes of traffic, no shoulders and a 3,000 foot drop if some RV has nowhere to go.  I am statistically inclined and would attempt it if no one has ever been killed trying it, but sight unseen I had some doubts....  We left Escalante at 8 after picking up Ralph and with the sun shining  in our face, this rough desolate country was sublime.  There was almost no traffic so it really is a fine bicycling route. The hogsback is not completely insane, it looked like you could pull your bike off the road a couple of feet to allow RV’s to pass without feeling you were teetering on the brink of a long fall.  But with a modicum of traffic it would not be a comfortable climb from the Escalante River to Boulder,UT. 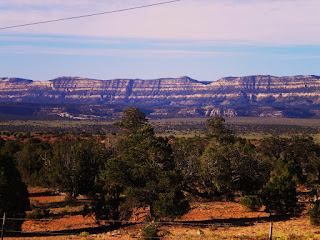 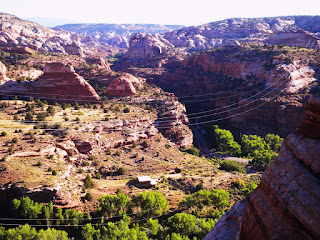 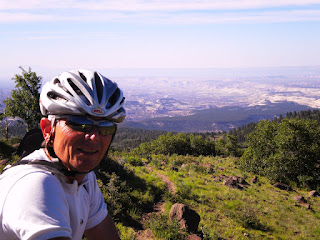 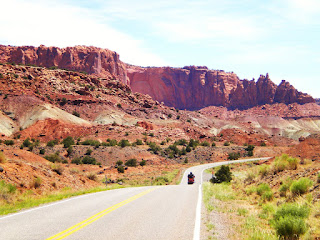 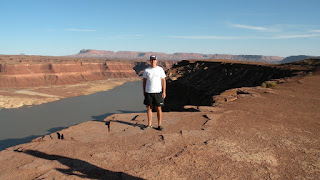 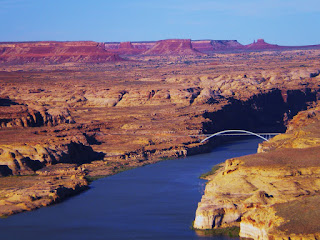 We unloaded the bikes in Boulder leaving an approx 2,500’ climb to the summit.  It was then 100 miles all kinda sorta downhill to the Colorado River.  This part of the climb did not feel steep, perhaps because the vistas are incredible and the landscape has a very Alpine feel. The higher we climbed the more trees and moisture in the air.  It was very similar to our experience in Great Basin.  At 5,000’ it’s blisteringly hot and dry with chapping winds and then, crossing 8,000’, everything starts to get verdant.  Pine trees and pockets of cool air in the shade.  Its invigorating and gorgeous looking back over the Grand Staircase .  Like a jigsaw puzzle, the sun's angle hides all the canyons and as the sun gets higher the relief map gets more colorful.  What a view from the summit.  We met a Harley motorcycle club at the turnout.  We bicyclists are not as clique-y as the motorized groups.  Why do Hondas, BMW’s, and Harley’s all have their own groups?  Is it spare parts or just that the people who buy the different motorcycles are so different they prefer riding with their own kind?  We Cannondale cyclists can get along with Serrotta, Felt or Trek folks.

The downhill to Torrey in the coolness was amazing.  Seems like the best place to live in the summer.  Winters are probably brutal this high.  Descending through Grover we notice a huge rock with an American flag on it.  When we meet up with the boys in Torrey, it turns out they had gone to the base and climbed it.  Torrey has a number of vacation homes and looks like a lot of terrific mountain biking and hiking.  We cooled at the convenience store.  Fairly active store at the turn onto Utah 24.  The guys were enjoying exploring and did not feel like riding  yet.  Nothing special for about a mile out of Torrey-wide open and Nevada feeling and then all of a sudden into these huge red rock cliffs.  The road follows the base of the cliff for ten miles and then the cliffs turn to sandstone and we pick up the Fremont River.  The road along the “river” with the barest amount of water has turn outs for historical markers.  Cabins from pioneer days and ancient cliff art.  But its the now white cliffs and slot canyon formations that just keep getting more and more other-worldly.  We break away from the river and in a few miles it feels like we are in Arabia-vast sand dunes into the distance.  We pass a couple of communities with abandoned hotels.  It just feels as if it got too hot and too remote to live here.   Tucked between two dunes was a funky looking restaurant just after Caineville.  Not open.  Shade however.  Its really cooking now as we roll into Hanksville for lunch.  This is a hot dry bedraggled looking town.  The map says its 50 more miles to the Colorado R.  Ouch!  Not a world class lunch at the Red Rock Cafe but getting a seat in air conditioning is reward enough.