Noisy peacocks woke me.  Usually when I’m camping it’s young people singing songs and drinking beer late that keep me awake and old people leaving early that wake me up.  No people at the campground so Nature provided the alarm clock. 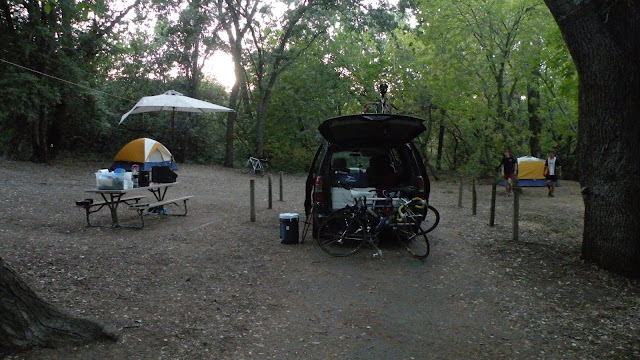 My first task is boiling water for the coffee press.  We had two coffee-presses--Daniel was a Scout and he remembered the Scout motto “Be prepared”, so he brought one.  There may be a Starbucks on every corner almost everywhere but you don’t take chances with essential items.  My backpacking stove is easier to get fired up than the Coleman but it takes so long to boil water using my pot from home I might should have invested in a back packer kit with the sculpted corners to improve the heating efficiency.  I threw in the “might should” for a recognizable regionalism effect.  I say it all the time, might as well be honest enough to write it.   I like to pour in the water and start the steeping, then walk away far enough so that when I return I can smell the coffee.  If I had time I would do bacon but what a mess.  Smell is almost worth it though. When it’s outside I wonder if coffee and bacon make the wild animals envious (or frightened)?  First cup is so pleasurable, it would be nice to let the boys sleep to whenever teenagers have had enough sleep but we’d be doing afternoon riding for sure.  I start packing up.  Soon I’ll wake Hardy have him drive me the 12 miles to Davis where we finished yesterday and we’ll pick up Ralph to head to the Start.  He’ll come back, wake Daniel, pack up everything, and then meet us for lunch somewhere between Folsom and Placerville.  Sooner, if one of them wants to ride rather than explore the  UC Davis campus....

Ralph is ready at 8 at the AmeriSuites.  The clerk lets us load Camelbacks in the kitchen because the state of California apparently can’t pay for water in the campgrounds.  We would have paid a camping fee if someone had asked. I hope they get some money to unlock the bathrooms and turn on the water and pay a ranger.  Now Death Valley has gotten The Ask down perfectly.  They put a little Kiosk in the middle of nowhere and say put $20 in the slot to visit.  The quietest, loneliest place outside a cave and they want you to pay to visit Hell. I wanted it on record we were in there so I paid the fee with a credit card.  If we got lost, the obituary could read--”last seen at Hell’s Gate....”.   It took us a while to find where we finished yesterday because it is right on the map edge.  The day was already feeling warm when Hardy drove off leaving us riding into the sun.

I don’t want to be too categorical but the next 10 miles on the Yolo Causeway Bike Path were the worst of the trip.  Headwind, sun in the eyes, riding beside I-80 which was noisy as sin and large trucks keep plowing you with their bow waves.  There should be some of that beautiful California scenery on another route.  We rolled into Sacramento.  Stopped by an RV at a light  behind a svelte lady on a beater bike.  When we got up close enough to greet her, Ralph and I were struck by her lack of teeth.  From the back she looked 20, from the front-homeless.  Ralph wanted to show me the Capitol so we headed downtown and joined a demonstration of a bunch of purple shirts. 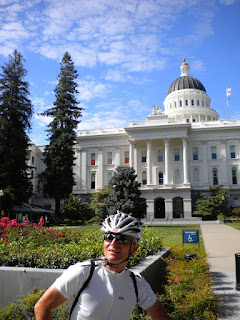 They were some union of something like public service work.  They undoubtedly wanted some money from Arnold before it was all gone.  The grounds are nice--they have police riding bikes that politely ask you not to ride bikes on the paths around the State House.  We moved to the roads and wandered around looking for a good way to get on the American River Bike Trail.  Old Sacramento has cobblestones--a care must be paid kind of  place to bike and we eventually got on the trail.  We were passed by a lot of zippy bike clubs with matching pro look outfits.  Several moms exercising with their babies worried me because they seemed so far from civilization but being from there they undoubtedly knew how to get on and off without going the entire 20miles.  It’s not really well marked but no need to over sign for first (and only time) riders.  Some  danger from club riders.  We stayed to the right in case some club was pace-lining the opposite direction.  We did hitch a ride for a few miles but we didn’t get a real warm fuzzy feeling they wanted a touring bike (or strangers)on their wheel.  Miles do evaporate in a paceline though.

We stopped at a River Park and it looked like a company picnic on Wednesday!  Grills, tents,  softball games, smoke everywhere.  It was very warm, over 100.  Ralph had his thermometer, he’s techno savy and would do the NWS weather on his laptop in the morning, downloading hourly wind and temps.  With his Edge 705 he is a real data enthusiast.  I, by contrast, yesterday  forgot to put on my HR chest strap and today I  forgot to charge my GPS cycle computer, so it quit after 25 miles.  Batteries are a curse.  I could never have a car that ran on batteries.  Solar power sounds sexy but anything that relies on batteries worries me.  I have bad luck with batteries.  I had a 65‘Rambler with no hood lock and my battery was stolen a number of times and when I went to the used battery places to purchase another one, I always felt I was buying mine back.  My video cam is always dead when I want to use it. It takes a special person to organize their life well enough to keep everything charged up.

The day just keeps getting hotter.  Short hill in Folsom is steep but only a problem because we are not entirely certain of the route and reluctant to ride back down to follow the map. Generally the hills are not bad.  Ralph purchased a thin wicking headband for me that is a Godsend for sweat.  Sunscreen and sweat are tearing my eyes up.  I go through three terry cloth headbands but they are too thick and slide under my helmet slightly blocking my vision.  The Halo headbands wring out and dry out quickly.  We stagger in to Cameron Park for lunch at an empty pizza place.  The Mexican place yesterday and the Italian today are low on customers. I had a beer and burrito yesterday-making the afternoon ride in the heat harder.  Won’t make that mistake again.  I’m famished so I’ll have a beer and 5 slices of pizza..... We spread out and enjoy the air conditioning.

Suddenly my right thigh cramps.  I am 57 years old and have been warned of cramps my entire life--from my mother not letting me swim after eating to bicycling buddies warning of them and getting massages after a fast club ride to prevent them.  But I’ve never had one.  Wow! what an experience.  I can see why you don’t want one in the water.  The guys thought I was having a heart attack, the way my face froze up with alarm.  We cooled off for at least an hour before pushing off for Placerville.  We tried to get a beer in Placerville but it was getting late so we pushed on to Lucinda’s Bed and Breakfast past Somerset.  The uphill  road out of Placerville is relatively shady and traffic light.  I was expecting some cooling effect from the altitude change but from my perspective, it only got hotter.

The B & B had only us there.  We had asked about camping for the boys and they found us a flat place on the horseshoe pitch but were kind enough to say the boys could sleep in the room on the floor to enjoy the A/C.  We had a one bedroom place and plenty of room.

There is only one place to eat in Somerset and it does not take advantage of its monopoly pricing power.  It is the best restaurant in the whole world.  Maybe you have to ride 84 miles to come to that realization but the owner is cheerful, the only waitress is perfect, and the food incomparable.  Molly, our waitress was a delight and we would still be there if she wasn’t married.

That reminds me I should mention marriage. I am married and what I am about to say bears no resemblance to MY marriage at all.  That’s why I am an expert and happily married. I want to be completely sexist about this:  Women and men could have a partnership with equal rights but you know, that’s not really marriage.  My dad had it about right when he opined that men make all the big decisions and women all the small ones....there just hadn’t been any big ones to make in 50+ years of marriage.  Every marriage is unique and its own thing but generally from a guideline standpoint it would be useful if we could say the man’s job is the purpose of the marriage and the women’s job is the relationships around the marriage.  Men do the meaning, the women do the nurturing and caring.  In short not a partnership, a mutual sacrifice.  Marriage is a sacrament, so it needs a sacrifice.  A mutual sacrifice of different responsibilities. Cheating is less than 100% commitment.  As President Carter pointed out, we all do it because people aren't naturally at 100% capacity, as they say we use 10-15% of our brain power.  Obviously we underperform.  If the women thinks she signed on with a doofus or the guy wants to run around, great, they are candidates for the usual boy/girl relationship called serial monogamy.  Gay people can play too.  Same rules.  I think we should have something called a legal partnership.  All marriages are legal partnerships but not all legal partnerships would be marriages.  Why shouldn’t the church get to decide whether it’s a marriage or not?  If one church says a member can only marry once and another says you two guys can’t marry at all and another says you can marry as many times as you can say “I do” well that’s just viva la difference.  Find a congenial church......

Tomorrow we will rise and go to the sun--50 miles uphill to Carson Pass and then the mother of all descents.  We are ready.