Today was an easy start for a ride across the country: 75 miles including a ferry ride and not many hills.  Logistically, it was rougher.  Let me explain.  Ralph and I spent the night in a Santa Rosa hotel, 20 minutes from my sisters’ house in Larkspur where the boys, Hardy and Daniel, were camping in the backyard.  We had a ferry to catch across the Bay to Vallejo at 8:30AM from the Pier in San Fran but the start of The Ride was the parking lot on the North side of the Golden Gate Bridge.  Thus, we had to get up, pack, check-out,drive to Larkspur by 6:30, pack tents, bedding, and suitcases , in order to drive to the bridge, unload, lock the car, ride across the Golden Gate into the city to get breakfast, eat, and then Ralph would ride BACK to get the car and drive it to meet us in Vallejo while we would need to find the Ferry terminal buy tickets and load by 8:30. The next ferry was  an hour and a half later so if we missed our ferry then we would be doing the 75 mile ride across the Central Valley at mid-day rather than in the cooler morning.   There were thus a number of "deadlines" to meet, kind of like work rather than vacation. 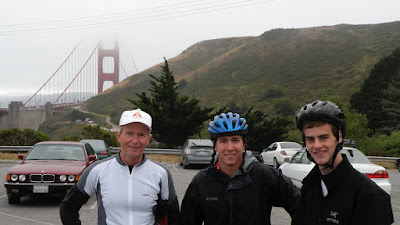 We did not ceremoniously dip the rear wheel in the Pacific Ocean.  I believe a dipper must be planning to ride the entire way across the country.  There is no point dipping to go halfway. A pretend dip without expecting to dip in the Atlantic is a hypocritical act and deserves scorn.  We had a Sag and would sometimes cover miles in the car and thus we could not dip.  Interestingly, I was not so troubled by the inconsistency when my children were baptized.

The ferry had 1 commuter from San Fran to Vallejo.  Turns out Vallejo is bankrupt and a little low on jobs and so there is not much call for someone living in San Fran to commute.  Our guy had been doing it several years and it seemed extremely relaxing to be reading on an empty ferry but  an hour commute would chap my day.  He probably could have gotten a cheaper apartment in the outskirts rather than having to pay San Fran real estate prices but not had the cachet of living in San Francisco.

We disembarked and spent the next glorious hours riding a tailwind to Fairfield and lunch.  We met up with Ralph after some technical cell phone coverage issues and had no idea what a bad idea it was to rely on cell phones.  When cell phones can’t find towers in the Sierras and in the Nevada desert, they search and run out of juice rapidly.  When you are counting on calling someone, both phones have to be charged and close to a tower.  We were always failing to meet these two obvious conditions.  The charger was rarely close to the phone needing to be charged and the unhappy discovery that your phone was dead was made by everyone, inconveniently, a number of times.  POA-1: (Piece of Advice 1) Don’t get too fancy with logistics and expect the cell phone to ride to the rescue.  A Sat phone seems like technical overkill for a bike ride.  As long as the driver has a map of the route and the group isn’t into spontaneous route changes, everything should work out fine.  It did for us.

Once out of Vallejo it is amazing how quickly the ride becomes rural.  There are frequent views of the bay and suddenly you come up over a hill and there are what look to be lost naval destroyers just floating in the middle of nowhere.  I was not fond of the route along I-something 80 but Pleasant Valley Road after lunch is just a beautiful ride as you head to Winters.  From Winters its a hot flat pedal into Davis but on a sunny Tuesday afternoon riding through UC Davis campus, it made Ralph and I wish we were back in school--frisbee, tank tops, crowds of young people....We reached bicycle heaven in Davis by 5, in time for a beer on the main drag. 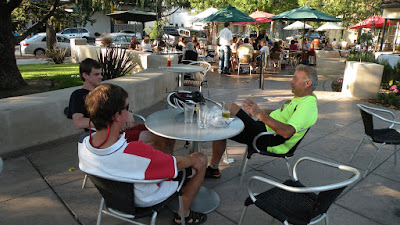 Ralph found an hotel and we returned to beautiful Putah Creek Campground for the evening.   Lovely campground with no rangers because the State of CA has money woes.  Very few campers.  However, there are a number of peacocks and they can be noisy.

My reflection for the day is financial sanity.  It was 2008‘s financial hurricane that prompted me to go on this bike trip now rather than in a few years, after retirement. I have a 12 year old, I don’t know when that will be.  It is apparent that for the self employed, retirement is now more problematic.  I actually have never been a fan of the concept of “retirement”, people should work at something useful, something they enjoy, their entire life.  Seems reasonable to golf and travel and work LESS but still you need to work at something you think needs doing.  A man without a mission is almost useless.
My complaint is with the abuse of the middle class virtue of prudence and frugality by the elites.  Everybody’s supposed to save, save, save for a rainy day and the caretakers of those savings are abusing the trust. The government has encouraged saving in 401-k’s and is now poised to completely trash the efforts of careful savers by debasing the currency.  “Investing” is not much different than a trip to Vegas.  Caveat emptor. Savings and savers are much diminished and de-valued and it seems clear to me that if “old” money and “old” debts are going to be superseded by “new” money created and passed out to the politically connected, then I would counsel those who still have assets to take them back from the national squanderers and give it to a worthy cause.  Cut off Wall St. and invest locally.  (Eating locally is another rant).    I am not bitter (yet) but I am perplexed.   We are living in a delusional society.  Everyone knows where their own interest lies but no one seems up for the hard work of building a sustainable substantially just SOCIETY.  Elites who should know better-have made self serving and irresponsible decisions.  I feel it is highly likely that current government policy and current corporate profit seeking will completely undermine the incentives in the world financial system.  Think about that.   If the value of money is questionable and variable,-- to what end work and saving? The God fearing have an answer for that- Heaven.   Could a society exist without God or Money? How many busted utopias can you name? And where is shangri-la?  Anyway, the savers are toast.  The paycheck to paycheck crowd will turn out to be the wisest.

Government attempting to borrow its way to prosperity is ludicrous.   What about a grand society? - sustainable, just, environmentally aware, ecologically sensitive?  We’ll have to work our way there, not borrow it.  We have subsidies supporting our system and it is unclear what would “happen” if they were discontinued.  Let’s pick a number between 20-40% and say governments, at all levels, get no more than that.  It being a democracy we want to keep the private workers more numerous than the dependents.  Now what can we build together?  And not another road, please.  When gas goes to $5 a gallon and no one has jobs we will have all the ribbons of asphalt we need....
Posted by AlaBikeDr at 9:50 PM